You surely know that men are ready to do anything (and say everything) to lure you into their beds. Still, you keep falling for the same ridiculous and uncreative lines. The men are not showing smarter and it seems that they are all using the same playbook.

There may even be a secret course in which they all participate (who knows?) To learn how to lie to women and manipulate them. You know all this, yet you continue to be fooled by this kind of man. Do you know the one who only wants to get intimate? Perhaps you are a born optimist who thinks that one day she will meet a man who knows what to say and who keeps his promises (without ulterior motives)…

You may also have watched a lot of American rose water movies where the young woman succeeds in changing the womanizer into a respectable man. With a little hope, it is possible! But until that beautiful day arrives, we have prepared a list of the 15 most common lies that men use to lure a woman into their bed!

Frequently used phrases by men who only want to get intimate

1. You are the most attractive girl I have ever seen

To prove our point, let’s say that this man is 25 years old. Throughout his life, all the women he met or dated, all the celebrities he saw on television, and all the models he met on billboards, every time he comes out of his house, are they less attractive than you?

Sorry to bring you back to reality but he is lying! Of course, you are beautiful, attractive and brilliant, but this sentence aims above all to touch your ego and, therefore, to entice you into bed. While he is talking to you, there are surely five other girls who send him messages to answer this same catchy line.

Don’t be fooled! He uses this phrase because it works on most girls but you are not just anyone: you are smarter than that!

Men have found nothing better to make a girl believe that they are honest and open than this sentence. moreover, most of them have stories ready to tell to the different women they meet. All this, to make you feel unique and special!

Indeed, you tell yourself that a person shares his intimate stories only with someone to whom he feels close. Yet these men have either invented them or repeated them so many times that half the girls in your town know them.

So when a man says this sentence to you, don’t think that your beautiful face or your attractive look convinced him to open his heart. He’s just trying to get back to your bed as quickly as possible.

When a man tries to put a girl in his bed, he tries to pretend to be a saint. He is trying to convince you that he spends his weekends watching educational documentaries and that he refuses all invitations from his friends. He never goes out!

“Night clubs are not really my thing!” Does that sound familiar to you? Of course, since you have heard this phrase hundreds of times before. A man looking for a partner necessarily spends a lot of time in places suitable for meetings.

This means that he often goes to the bar, in nightclubs or at parties with his friends and his agenda is full! Didn’t you think he spent his Saturday evenings twiddling his thumbs in front of the television?

4. I’m just waiting for the perfect girl for me

The perfect girl for me … for tonight! This is what he really means. When a man tries to have fun, he will try to be subtle and pretend to wait for “a good girl”. The truth is that he probably already met many nice and sweet girls and spent the night with them.

Now that he understands that this phrase attracts the other gender, he uses it all the time. If you fall for this line, after a night with him, you will never hear from this man again because he is not looking for a serious relationship.

Some men think that to attract a girl, they have to show how rich they are. They then leave the keys of their Porsche lying around on the table or they mention the gigantic rent they pay for their apartment. They hope that you will understand these clues and that you will agree to spend the night with him.

This phrase has attracted so many women to their beds that they continue to use it. But, is a man trying to buy you really attractive? And don’t forget: many of them lie about their so-called fortune!

6. I can’t wait to meet your family

If a man you’ve just met tells you he’s looking forward to meeting your loved ones, he’s lying! Honestly, this sentence is even a little terrifying! In most cases, a man would rather have a colonoscopy than see your parents.

He’s trying to get you to hold off on the idea of ​​a serious relationship with him. Don’t be fooled, he just wants to find a partner for tonight.

7. We have so much in common

When you start looking for a man, you realize that it is difficult to meet someone with whom you have something in common. So when this guy tells you you have a lot in common, you’re all excited.

You are already sending a message to your best friend that you have met the perfect man. Stop! Men know compatibility is important to women, so they use this phrase to draw your attention to the so-called similarities you have.

So when a man assures you that he won’t tell anyone, it’s his way of pushing you to the decision. But beware! A man who only wants to sleep with you, will not be silent: all his friends, his Facebook and Instagram subscribers and all his neighbors will know it!

These kinds of men have no respect for women and they don’t bother with the feelings of others. for them, you are just a number on a list.

9. You are so beautiful

Of course, you are beautiful. But, you also have a great personality, a hell of a job and a busy social life. However, this man only dwells on the compliments concerning your physique. He tries to flatter you as if he wanted to lure you into his spider web.

He knows what he wants and how to get it. He will stare into your eyes and repeat “you are so beautiful”. The next time a man broods on you with these kinds of compliments, ask him what is your favorite character trait. A guy obsessed with physical intimacy will lose his words and won’t know what to answer.

This sentence is a modernization of the famous “do you want a massage?”. Let’s be honest, most men hate hugs, especially if they don’t lead to physical intimacy! So if he offers you a sweet evening it is because he hopes that you will allow him to go further.

A man who tries to put you in his bed is not going to admit that he barely gets out of someone else’s bed. Instead, it will make you feel like you haven’t had physical intimacy in a long time. In this way, it seeks to show you that it is very selective regarding its partners.

Do not forget that for him it is a sport to which he has devoted his life: he seeks willing women to spend a crazy night. You don’t want to be another name on his list of conquests.

When a man tells you that, it means (in his language): I do not practice physical intimacy for one night but you are so beautiful that I will make an exception! You don’t believe it all the same? This is a typical lie: he seeks to show that he is different from others and that he really cares about you. He wants you to let your guard down and agree to spend the night with him because he is so exceptional and unique!

13. I am looking for a serious relationship

Many men believe that all women seek a serious relationship and a deep commitment. Which is wrong ! But, as they have a hard time getting used to modern times when women can also want a flirt or a date for a night, they play the card of the serious relationship.

They’re lying to you. If a guy tells you he wants a serious relationship as soon as you meet him, give him time to get into his own trap. Do not get into physical contact right away and you will see if he is still looking for something serious!

Once all other attempts have failed and he becomes desperate, he will tell you the word in A. Red flag! If a man is able to lie about the sincerity of his feelings, run away from him like the plague because nothing good will come out of this relationship.

We know that you want to believe in love at first sight and that you say to yourself “what if it was the right one?” But no… Love is a strong and intense feeling that cannot be born out of lies. This man is not for you, go to the next!

This is perhaps the worst lie a man can say. When a guy comes up to you and asks for your phone number, logic says he’s single, right? So why this need to clarify his situation?

Once he has your number, he will only send you messages, he will answer your calls very rarely or not at all and will not want to be seen in public with you. A clue? He is not single!

You have been warned! Now that you know what phrases men use to lure women into bed, be careful! Do not get carried away by the physical or the beautiful words, be on the lookout and be strong: you do not need this liar in your life! 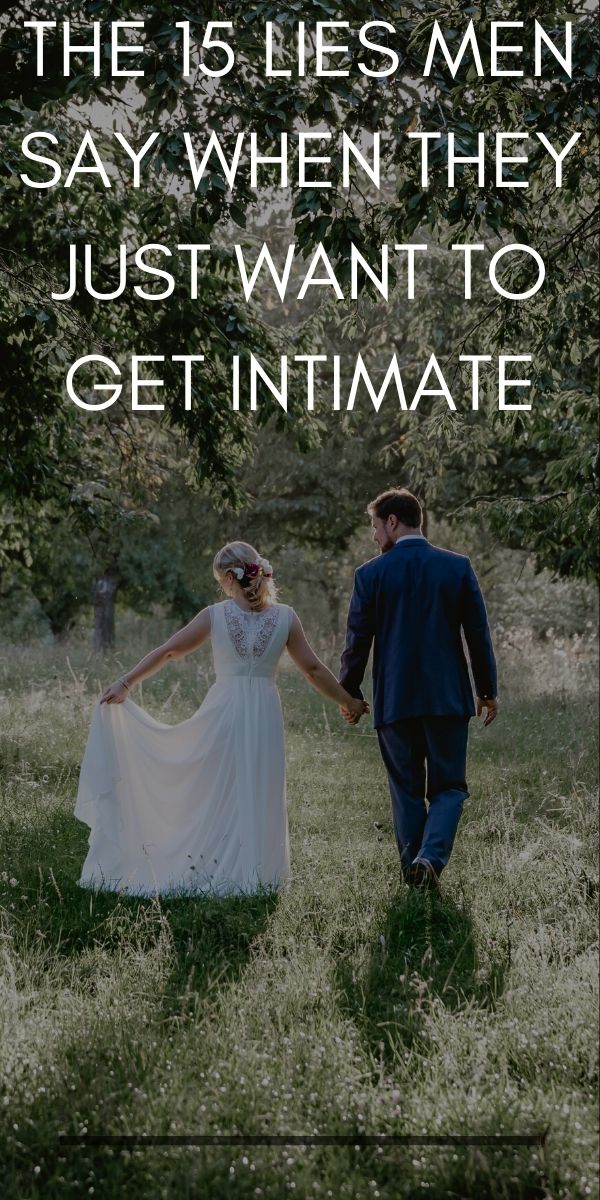