It’s not just the experience of mature women!

Each of us has physical, intellectual and emotional preferences when it comes to choosing a partner. But, what would you say if you were told that there was an aspect of a woman that made her extremely attractive?

Did you guess? We don’t think … it’s maturity! And, it doesn’t necessarily have anything to do with age. A mature woman does not have to be someone old; it is simply a quality that some are. These kinds of people are often called “old souls”. 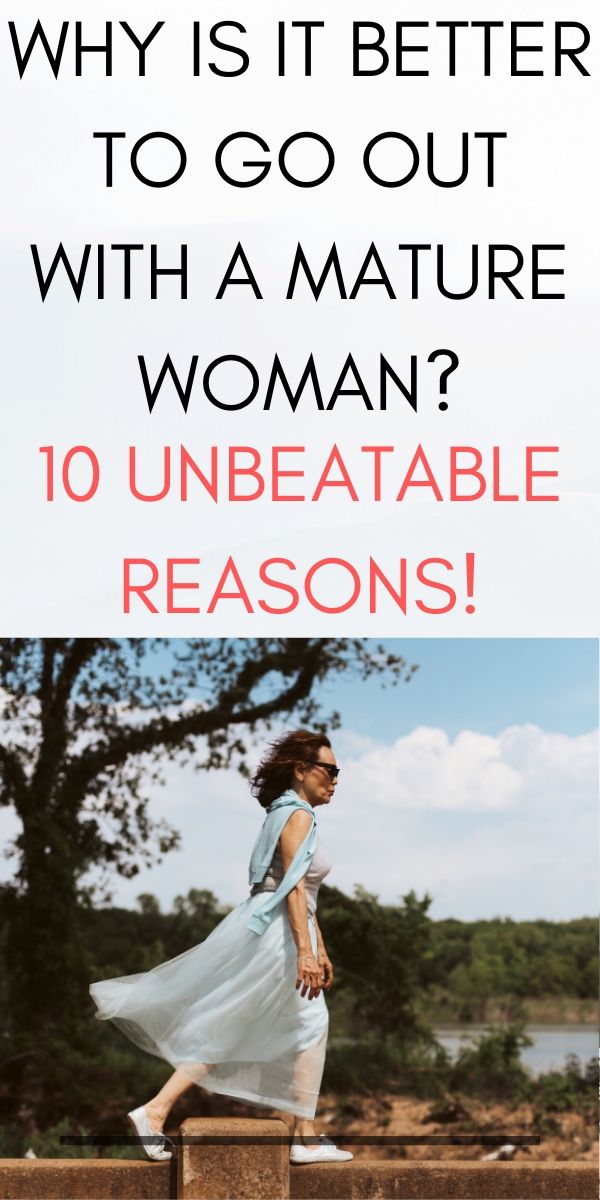 A mature woman has extraordinary qualities that make her much more attractive than the others. They have confidence in themselves, they know what they want and are clear about their desires. And, if you are a person who does not like the drama and the superficial and oversized reactions of younger women, you should go out with a mature woman.

While it is true that each relationship has its own problems, most of these are often caused by immaturity. A mature woman is not going to worry about the little details, the innuendo, and the children’s games. They know that relationships can be difficult, but with a little compromise, understanding, and communication; everything can be resolved.

Here is a list of the 10 qualities that a mature woman has that makes her much more attractive and worthy of your time.

The Benefits of Dating a Mature Woman

You are fed up with short-term relationships or women who have no objective and let themselves be carried by life, saying “everything is written; you can’t fight fate ”? Well, maybe it’s time to change the type of women you’re dating. Here are the 10 qualities that a mature woman brings to a relationship and that young women would like to have:

It is the finest quality of mature women. They surely have a well-regulated life, their own careers, friends and passions. They are self-sufficient and know how to get out of any situation. They are not affected by the opinions of others and do not need constant reassurance.

Mature women are not going to give up on their dreams for you and they are not going to let your relationship affect the important decisions they have to make. They take full responsibility for their lives; which releases the pressure from your shoulders. In addition, as they are independent, they will not try to limit or overwhelm you with their own insecurities: they will allow you to develop yourself personally.

2. She has more experience

A mature woman has experienced more: she has lost loved ones, made mistakes, traveled and accomplished a lot. At first, this will not seem important to you, but if you want to be in a long-term stable relationship, being with an experienced woman is essential.

Simply because a woman who knows life better knows love better too. She will not get up one morning and leave you: she will work on your problems. In addition, it has more interesting topics of conversation, which will allow you to establish a deep and true connection.

3. She knows what she wants

A mature woman has more self-confidence and it is more difficult to push her limits; which can sometimes be frustrating for you. But you know what? A mature woman who knows what she wants is a stronger and loyal partner.

4. She is honest and frank

With it, you are never going to have arguments in which you cannot get the truth from your partner. There is nothing more frustrating than trying to understand why the other is in a bad mood but refuses to say where the problem is.

You will not have these kinds of problems with a mature woman. If there is a concern, she will tell you. If you make her unhappy, too. But, on top of that, she will also give you the reasons! Honesty is an essential tool for good communication.

5. She will love you for who you are and not for what you have to offer

When you go out with a strong, independent and confident woman, you know she is with you because she really loves you. Not because of your wallet, your beauty, or anything else superficial. A mature woman is generally more financially stable than a young woman.

So you will be with someone who really sees you; a person who accepts you with your qualities and your faults. She will not see you as a trophy but as a human being who deserves to be loved and who is worthy of her!

6. She is more grateful

When you have had several relationships, you end up learning what is expected of them. And, more important than that, we know what we absolutely do not want to tolerate. Mature women understand this perfectly: they know what toxic relationships are and they choose to fly them from now on.

So when you do something right, she is thankful and not afraid to show you her appreciation. A relationship based on recognition helps the couple to live in a healthier and more serene way.

7. She’ll teach you a thing or two

This is not a competition of experiences. Perhaps she did not have a full life like yours but she was more receptive to the life lessons that accompanied these experiences. Mature women are smarter emotionally which makes them more observant, curious and aware.

They have received meaningful life lessons and they are not ashamed to share them with you. They are open about their past, their mistakes and their trauma.

8. Your relationship will be based on mutual respect

Why go out with someone who doesn’t respect you? A person who respects neither your dreams, your decisions, nor your choices? You will not have to demand respect, the mature woman will offer it to you on a golden tray.

9. Your relationship will be a partnership

A successful relationship is based on the work of both partners. If one of the two people is not a teammate, the couple cannot survive. Relationships require personal investment. A mature woman will not just let you make all the decisions, she will make them with you.

In addition, when she encounters a problem or has to make an important decision, she will ask you for your opinion because she is really interested in what you have to say. Nor does she wait for you to solve her problems, only for you to support her. And, she will do the same for you.

10. Your relationship will be deeper and more meaningful

The young love is exciting but it does not last. A relationship between two mature and confident people, yes! It is important that the two individuals in the relationship understand that they have different identities and that they need personal space.

A mature woman understands what a healthy relationship is based on.