What signs show that a man is in love with you?

You have been in a relationship for some time or you just met him but you already like him. You feel that you are attracted to him and that you fall in love. 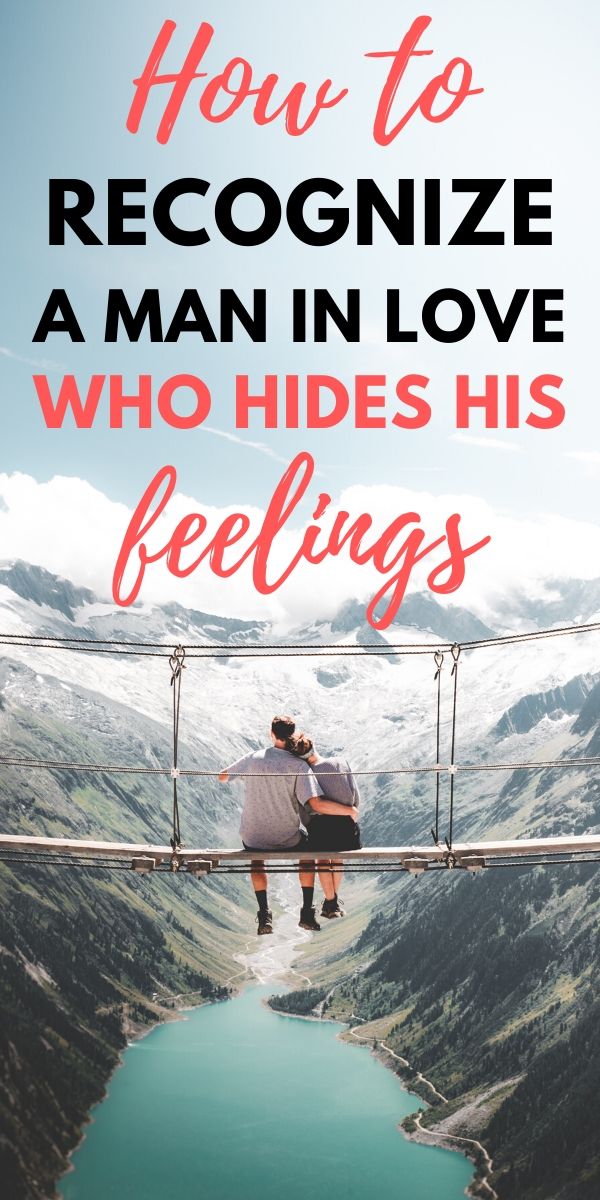 Yet you have the impression of his hand, it is rather remote. He doesn’t seem interested in you, or at least he doesn’t show it to you. Despite his strange behavior, you want to be with him.

But, something is blocking you: you are afraid of not pleasing him as much as you like. You fear being rejected and don’t know how to raise the subject with him.

Do not be afraid! This is normal. Remember that women communicate their feelings much more easily than men. For them, their actions are far more important than their words.

Generally, they prefer to show you their interest or love through tender gestures and touches. For example, rather than telling you that they love you, they will introduce you to their close friends.

For them, it is much more important to prove your love than to say “I love you”. How then to recognize the signs of a man in love in secret? How does a man show his feelings? What behavior does a man who hides his feelings adopt?

This is what we will reveal to you in this text. Indeed, we will help you decipher the behavior of a man in love who hides it. Here, then, are the signs of a man hiding his feelings:

1. He’s trying to impress you

In this way, he tries to show you his qualities, his strengths and his willingness to work with you to make your life easier. He wants to give you the impression that he is essential and that you can count on him in any situation.

This is THE sign of a man in love who does not deceive!

2. He never refuses one of your proposals

Whatever you want to do, he’s ready to do it with you. Whatever idea you have (go to the cinema or parachute), he will do everything to participate. Even if his schedule is overloaded, he will manage to free up a niche for the activity of your choice.

He wants to be present at all costs, which is the attitude of a man in love in secret.

3. When he is with you, he is never accompanied by other women

When you speak with him, you get the impression that among his friends or acquaintances, there are no single women. If you start the subject, it will respond briefly. However, he will never speak of it for himself.

He does not want to give you the impression that you have competition and if he has a single woman around him, he will always be careful to emphasize the fact that she is only a friend.

4. When he talks to you, he leans towards you

he can’t help but do that! Indeed, the fact that he is attracted to you unconsciously pushes him to seek intimacy. consequently, when he speaks to you, he looks you directly in the eye and instinctively leans towards you.

Likewise, he will lower his voice so that you will also have to bend down to hear him. He does not do it on purpose, but quite simply, when he is with you, he loses control of his body: he will, for example, grow a lock of hair or touch your shoulder.

5. He makes fun of other men in your life

This is what he prefers to do: he seeks to show you that he is the perfect man for you and that others do not happen to his ankle. But beware! This behavior can be double-edged.

Indeed, if he makes fun of other men in your life in jest and in a really funny way; so give it a chance!

On the other hand, if he demeans them in a nasty and degrading way; avoid it. This kind of man has an ego problem and if you couple with him, he will try to boost your ego.

6. It makes it clear to you that he is single

He will often discuss this subject. He will tell you that he is looking for a special woman, that he is waiting for his soul mate or that his heart is ready to love. By saying that, he will probably give you a look that says a lot.

If a woman approaches him when you are together, he will talk to her until he sees a reaction from you. If he sees a little jealousy in your behavior, it’s won!

Once he gets this reaction, he will gently push the other woman back. And there you will realize that he is just trying to get your attention. You will not be able to prevent yourself from thinking: “it is the behavior of a man who seduces”!

7. His body language is quite open

You have his full attention and it shows. Men generally like to look around to see if there is anything interesting. If when he talks to you, he looks you straight in the eye, it means that he has already found what interests him.

In addition, if he feels good with you, he will tend to gesticulate a lot. He will speak with your hands and describe certain situations to you visually.

Here, again, typical behavior for a man in love.

8. When you talk about another man, he becomes silent

If another man in your life interests you, he will listen to you talk about him but will not make any comments. however, his attitude will leave no doubt: he does not like the idea that another likes you.

One day he will be 100% present, you give hundreds of compliments and offer to spend more time together; another, it will practically disappear. The explanation for this kind of behavior is rather simple.

He is in love with you but is not ready to reveal it. Perhaps he is not sure of your feelings or is he afraid of going too fast? At one point, he lets himself go and takes advantage of the present moment; then to another, he steps back for fear of being rejected and hurt.

10. When he’s with you, he seems nervous

When he talks to you, he seems to be losing his words. When he explains something to you, he plays with his hair. It looks like ants are running all over his body, he moves so much in his chair!

The reason for his attitude is this: he is gibbering too much to hide what he really wants to talk about. He is tempted to tell you that he liked you but something is preventing him. He also wants to look his best and is afraid that you won’t find him attractive.

11. He imitates your movements

When you are attracted to someone, you subconsciously imitate their actions because you want to be like him or her.

To check if he is in love with you, you can do a little test. The next time you see yourself, cross your arms when you talk to them. if he is interested in you, he will copy your attitude.

12. He teases you and jokes about the possibility of being in a relationship with you

Men like to tease and be tickled. This allows them to create intimacy and a strong bond without all the seriousness of a romantic relationship. For them, it is a way of including you in a private and secret group of which only two people know the language.

A man who is in love with you will surely give you a nickname and joke about being in a relationship with you. It’s a test: it tries to see the reaction you are going to have to this idea.

His signs of a man in love are rather easy to decipher. If you spot this behavior in the person you like, don’t hesitate! Tell him how you feel and trust us: he will respond in the same way!

On the other hand, if he does not manifest this attitude, there is little chance that he is interested in a relationship with you. In this case, you have two choices: either you give up the idea of ​​being with him (but that could break your heart) or you take your courage in both hands and ask him the question directly.

If he says no, at least you know what to expect. Who knows? Perhaps he will surprise you by admitting to being attracted to you …