SHOULD WE ALWAYS SPEAK THE TRUTH IN LOVE?

There are certain truths in love that should not be told to your partner, because it might hurt him, or he might change his mind about you, see you.

differently. For example, it’s best to avoid talking about bad things you’ve done in the past, or saying something about them that might make them uncomfortable …

Chttttt… turn your tongue 7 times before saying words you might regret!

Even if you love each other very much and feel very close, there are some truths that should be kept quiet, so as not to affect the other.

Sometimes it’s best to keep your mouth shut to prove your love for her.

TELLING YOUR WIFE OR MAN THE TRUTH: SOME MORE CONCRETE EXAMPLES OF PHRASES TO AVOID IN A ROMANTIC RELATIONSHIP.

Even if it’s true, you can’t tell it. She might feel very bad, and think you don’t like her anymore!

The same goes for the “Honey, you should lose some weight.” “. Think how he would feel to hear that!

Instead, let her choose the perfect time to lose weight on her own. Because believe me, she realized it long before you did, and she doesn’t want to be reminded!

We know that for men, the mother always represents a role model in life.

But all families are different, and so are all educations! Everyone has learned to do things their own way,

and that’s why you can’t ask your girlfriend to do things like your mom!

Of course, you can relate how your mother used to do it, but in the end, your girlfriend decides because she’s a woman too.

You will have to adapt to this new way of life, and without comparing her with your mother.

Maybe at the very beginning of your relationship you love your mom more than your girlfriend, but don’t show her.

She might feel in competition with her, or worse, think that you only function through her. And that could cause you some trouble.

4) DON’T CRITICIZE HIM WHEN HE’S TRYING TO DO HIS BEST.

It’s the worst thing you could do (you attack his macho side, watch out girls!). If he tries hard to do the right things and you start to criticize him, he’s bound to feel upset that you don’t run out of praise for his efforts.

Instead of criticizing, help him, and maybe the next time he will do better!

If your family does not have special sympathy for your girlfriend, it is best not to tell her so as not to cause unnecessary anger or sadness.

In addition, it might cause tension between her and your family. All you need to do,

it is telling your family that they are the one you have chosen, and that they must respect your decision. Why not even try to make them change their minds about it!

Never compare the activities you do together with the ones you did with your ex!

It might happen that you end up in places that you dated with an ex, but don’t talk about it.

Your partner would be upset to know that you thought of someone else.

Plus, NEVER compare your ex’s performance in bed!

7) DON’T TALK ABOUT YOUR YOUTHFUL MISTAKES.

If your loved one knows nothing, keep silent.

If you tell him that you cheated on old friends, for example, he will think badly of you, and even be disappointed.

He might think you would have it easy to start over but with him this time!

There are some things that are best kept secret.

Even though it’s an important game, don’t tell her to leave you alone because you’re busy and don’t have time for her.

You better smile and pretend to listen. (it works pretty well! lol)

Be careful, women are cunning and might then ask you what you were talking about before, to test you. (I already had the joke!)

He has known his friends longer than you have, so it’s not a good idea to say that you don’t like them, or to speak badly of them.

He will inevitably get angry about it. In order to get along better, pretend you like them and everything is cool.

When she is very angry, the worst thing you can say is to ask her to relax.

It will make her even more pissed off, because she’ll think you don’t take her seriously.

Telling her to relax is like telling her there is no reason to get angry, and a woman doesn’t like to be contradicted, especially at such times!

11) DON’T SAY THAT YOU HAVE LITTLE CONFIDENCE IN YOURSELF.

In a relationship, a woman expects to be with a strong, confident man.

So if you lack self-confidence, or if you are jealous because she has, for example, a better salary than you, keep it all to yourself!

She must not know. Why would you reveal certain things to her that she had never noticed that you might dislike?

12) DO NOT DECLARE YOUR LOVE IN THE MIDDLE OF AN ARGUMENT.

The words “I love you” mean a lot to a woman, that’s why you have to say it at the right time.

But most people say it at the worst time, when they feel guilty, and want to be forgiven.

It is a bad choice. At the time, she won’t believe a word of it, and will just think that you are saying that to ease the tension.

You will have plenty of time to tell her that you love her, but after the argument …

If you ever find his best friend very nice, very funny, etc., don’t show him too much!

In addition to developing a certain jealousy, he or she might get angry and no longer trust you.

Keep this a secret and make sure you don’t let anything too glaring show when her best friend is around.

If you want to have long and strong love affinities, there are things you need to refrain from saying!

TO BE HONEST IN LOVE, TO CONCLUDE

Not telling the truth in love is not necessarily bad. Let’s say you fail to say something, rather than lie!

More seriously, some people are more likely than others to these situations, it’s up to you to judge in which situations you can afford to speak the truth in love at the risk of bordering on romantic separation. 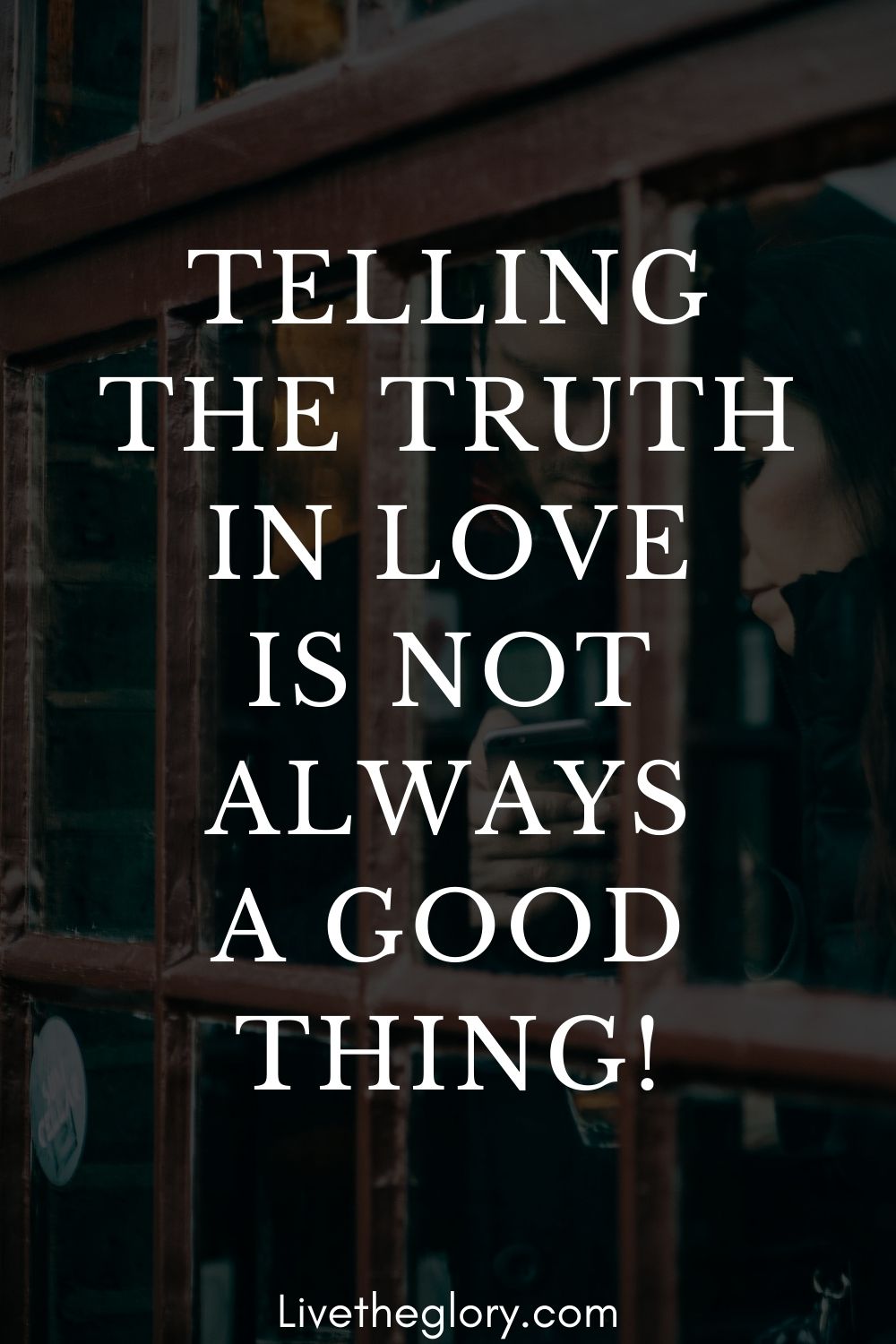